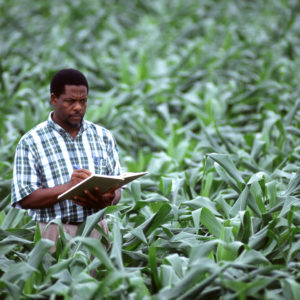 FDA now charged with selling us on food safety. Most of what we eat in the U.S. has been bio-engineered in some way to produce a greater yield per acre or to circumvent ever-evolving plant diseases. According to the USDA, the following U.S. products are genetically modified: 94% of soybeans; 92% of corn; 94% of cotton; 95% of sugar beets (a main source for making sugar); 90% of canola oil; and 77% of Hawaiian papayas. It’s the FDA’s role to monitor, investigate and safeguard the public and now it is also being paid to convince you that it’s done just that. The fiscal 2017 spending bill (enacted April 2017) includes $3 million for the FDA to coordinate with the Agriculture Department to educate consumers “on the environmental, nutritional, food safety, economic, and humanitarian impacts of such biotechnology, food products, and feed.”

Purple Rice as a cancer preventative? Chinese scientists, headed by Yao-Guang Liu of South China Agricultural University, have created genetically modified purple rice that can reduce the risk of certain cancers, cardiovascular disease, diabetes and other chronic disorders. The resulting rice has high levels of antioxidant-boosting pigments called anthocyanins. It’s an incredibly complicated process, but scientists report that the developed “transgene stacking vector system” could be used in the future to develop plant “bioreactors” to deliver many other medicinal ingredients and nutrients.

“Billion Dollar Corn Pest” facing new eradication agent. The EPA recently registered four products containing a new plant-incorporated protectant (PIP) to help U.S. farmers control corn rootworm. PIPs are plants which have been genetically engineered to produce a pesticide inside their own tissues. The new agent, SMARTSTAX Pro, turns off a gene critical to corn rootworm survival, resulting in its death. This application is the first RNAi-based plant protectant product to target an insect pest, prompting the EPA to seek advice from the FIFRA Scientific Advisory Panel.

Canada seeks to lower cow emissions. The latest Genome Canada project intends to increase feed efficiency while reducing the level of cattle methane emissions, a greenhouse gas that traps 30 times more heat per molecule than carbon dioxide. As part of the work, lead researchers Filippo Miglior (University of Guelph) and Paul Stothard (University of Alberta) are analyzing cow genomes and working with dairy producers in the U.S., U.K., Denmark, Australia, and Switzerland to help identify the less gassy cows. Then they’ll redistribute the appropriate bull seed to pass along this desired trait.

Back to the beginning: are genetically manipulated crops actually safe? The FDA will surely note, in its new mandate to “educate” us, that America’s National Academies of Science, Engineering and Medicine concluded in 2016 that there was “no substantiated evidence that foods from GE crops were less safe than foods from non-GE crops.” Likewise, Jim Greenwood, President and CEO of the Biotechnology Innovation Organization (BIO) backs documentation that biotech crops have increased farming income worldwide by $167.7 billion. And, he added, “The increased use of biotech crops has allowed farmers to grow more sustainably. Without biotech crops, billions more kilograms of carbon dioxide would have been emitted in 2015 alone – the equivalent of adding 11.9 million cars to the roads. Additionally, these crops have reduced the need for crop protection products and enhanced soil quality.” However, each of us needs to come to our own conclusion, since we are, actually, what we eat.

Refer a business, earn some $$
What I learned at Bid and Proposal Con