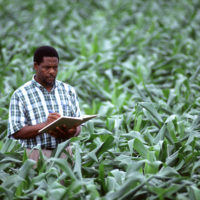 Biotech Review: The food you eat – what’s on the GMO horizon?

Today’s biggest agricultural challenge: producing enough food for the world’s growing population without using up all our shrinking soil and water resources. Secondarily, how can farmers reduce food toxicity in light of increasing cancer rates? Many futurists believe that bio-technology is the [only] answer. The resulting third challenge: getting those foods past rising consumer scrutiny and emerging regulatory hurdles.

Consider this: Over three billion people depend on rice for survival today. Scientists predict that land which provided enough rice to the reliant populace in 2010 will need to produce at least 40% more grain by 2050. Is that even possible? Yes, and it’s even probable, given ever-advancing gene editing technologies. Turning genes “on” and “off” or adding new ones has become almost commonplace in biotech circles. In fact, it is estimated that U.S. farmers have increased yields by nearly 50% in the past 50 years, after the introduction of genetically modified seeds (GMOs), while maintaining the same levels of pesticide and fertilizers. GMO corn has been planted in the U.S. for 20 years, resulting in yields of 40 more bushels per acre today, on average, than crops grown by our European counterparts.

Recently a new “Arctic Apple” has been brought to the U.S. market that has been modified so that it doesn’t turn brown when sliced and left out in the air – or when bumped and browned during shipping. It’s predicted this could improve the salvageable crop by as much as 40%.

Worldwide adoption of GMO processes is likely inevitable, despite Europe’s slower approval process. At Oxford University, a “supercharged” rice is being crafted right now by adding an extra gene promising yields of 50% more grain per harvest. All over the globe, scientists are working on their region’s most pressing food supply problems. Not surprisingly, biotechnology is the forerunner over new mechanical farm equipment advances or cheaper labor solutions.

Meanwhile, to address that noxious toxin problem, J.R. Simplot created a potato that, when fried, doesn’t release cancer-causing chemicals. (Eating fried potatoes two or more times a week may even double your chances of an early death, says a recent study.) Simplot recently partnered with Iden Biotechnology to produce a broader platform for related GMO products. You’ll probably eat those non-toxic potatoes if you visit a McDonald’s in the near future, since Simplot is its major French fry provider.

Some modifications have less to do with survival and more to do with humanity’s taste or visual preferences, and are altered to give foods a more desirable look or sweetness. For example, Del Monte is now growing pink pineapples. Then there is the promise of anti-aging foods: Monsanto and Pioneer are working on antioxidant-boosted tomatoes, as are Chinese and French researchers who genetically altered tomatoes to boost the crop’s “anti-aging” properties.

As the furor over eating genetically altered foods is quieting, in large part due to multiple studies showing no biological harm to consumers from these crops, a new fight looms on the horizon: the emergence of GMO insects to breed out malaria-carrying mosquitos and other disease-carrier pests. Could this science be used to create biotech war weapons that would spread rather than end disease?

All that and more coming up. Stay tuned.

How to host the best holiday party EVER.
2017 Trending Discoveries and Products