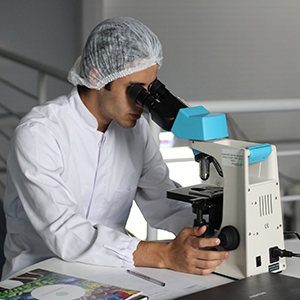 For this month’s biotech review, we’re exploring 2018 announcements of breakthrough medical therapies. The Federal Drug Administration’s Breakthrough Therapy designation is “a process designed to expedite the development and review of drugs that are intended to treat a serious condition and preliminary clinical evidence indicates that the drug may demonstrate substantial improvement over available therapy on a clinically significant endpoint(s).” In layman’s terms, these treatments show great promise over existing drugs:

Fennec Pharmaceuticals’ PEDMARK. About 10,000 children in the U.S. and Europe are estimated to receive platinum-based chemotherapy. While that’s the best treatment currently available for their flavors of cancer, a persistent and distressing side-effect can be hearing loss or deafness due to the treatment’s toxicity. PEDMARK, a unique formulation of sodium thiosulfate, has shown promise to prevent cisplatin-related ototoxicity in pediatric patients with standard risk hepatoblastoma.

Proteostasis Therapeutics’ PTI-428. This is a cystic fibrosis transmembrane conductance regulator (CFTR) amplifier which is hoped to increase lung function for those 12 and older. The FDA’s designation covers PTI-428 as a treatment for patients with two copies of the F508del mutation (one from both parents) who are receiving Vertex’s Orkambi as a background treatment.

Enfortumab vedotin, made by Seattle Genetics and Astellas. This drug received the Breakthrough Treatment designation in mid-stage trials. The therapy is an antibody-drug conjugate as a second-line treatment for locally advanced or metastatic urothelial cancer. The two companies involved also are evaluating this treatment for use with other solid tumors, including ovarian and non-small cell lung carcinoma. In related news, Johnson & Johnson’s erdafitinib was also granted Breakthrough Therapy status for the treatment of metastatic urothelial cancer.

Zogenix’s ZX008, for the treatment of childhood epilepsy. The company reported a very significant drop in seizure activity (up to 72%) with the drug during clinical trials with patients diagnosed with Dravet syndrome, a rare and “catastrophic” form of childhood epilepsy. These children suffer severe, long-lasting seizures in their first year of life, followed by other seizure activity types that don’t respond to standard anti-epileptic medications. The seizures can lead to cognitive and developmental impairment, and even death. At present, there are no effective, long-term treatments.

All of these Breakthrough Therapies are still in the testing phase and won’t necessarily come to wide use in the open market if the final clinical outcome doesn’t live up to the initial promise. That’s why the applications for breakthrough status are filed with lots of words like “hope to”, “may”, and “is expected to” rather than terminology like “will” or “shall”. But we hope for the best possible outcomes as we watch these trailblazers advance.

Crafting Inspirational Quotes that Matter to You!
In case you missed it: Custom On-Hold Music & Messages