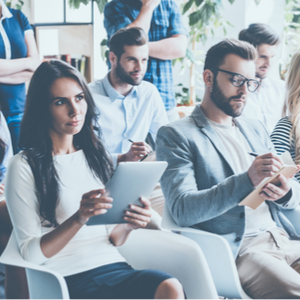 What I learned at Bid and Proposal Con

Imagine putting 920 kernels of unpopped popcorn in a room. The kernels represent perky, bouncy, involved, people, like me, who enjoy responding to RFPs. That’s exactly how I felt when I recently attended the Association of Proposal Management Professionals (APMP) Bid and Proposal Con in New Orleans.

The kernels started popping at the First Time Attendees workshop and didn’t stop until the conference ended. It was amazing to be in the company of people who do what I do. We spoke the same language!

The APMP conference was a great opportunity to network with people who respond to RFPs as well as to gain some ideas on how to simplify the RFP process. I arranged to meet my counterpart from U.S. Cellular at the conference where we compared our RFP successes over lunch.

Fifty-four seminars were held over the three-day conference. Some of the seminars that I attended included: Proposal Manager: From Good to Great!, Get a Clue! How to Win At Least 8-10% More Deals with Intelligence on Your Competition and Clients, Improve the Readability of Your Proposal in Four Easy Steps. I garnered some good points from each of the seminars which I can implement on-the-job.

What’s an RFP? An RFP is a request for proposal from schools, libraries, state, county, city, town, and Federal government agencies and businesses requesting pricing for phone or Internet service. I work with Sales, Product Management, Sales Engineers and others to put together the RFP response by the required deadline. This year, I’ve responded to 47 RFPs, so far. In 2016, I responded to 78 RFPs compared to 42 in 2015.

APMP, an 18-year-old organization, based in Washington D.C., is comprised of proposal managers, program managers and sales and marketing professionals. Business segments as diverse as telecommunications, IT, engineering, health, financial services, aerospace and education were represented at Bid and Proposal Con.

One of the highlights for me was the keynote speaker on the first day. Artist, Phil Hansen spoke about how to “Embrace the Shake.” Hansen began his artistic career by creating works of art in pointillism –in which small dots of color are applied in patterns to form an image. He developed severe nerve damage which caused his hand to shake.

Hansen thought he wouldn’t be able to fulfill his dream until his neurologist suggested that he embrace the shake. Hansen spoke about limitations – something that has been put in our way and self-limiting beliefs – something we have put in our own way. This made me consider how we can be our own worst enemy by limiting what we think we can do. We all need to expand our horizons, learn new skills, try new things and see the world in a different way. Check out Phil’s art and his TED Talks at www.philinthecircle.com.

The keynote speaker on the second day, Izzy Gesell, an organizational alchemist and improv artist encouraged practiced spontaneity. “Improv is a goal-directed, mission-driven team activity where each participant is both at various times a leader and a follower,” Gesell said. He added that we are our authentic self when we play, as we let our guard down.

Gesell talked about self-talk, the ongoing dialogue we have with ourselves that determines our beliefs about the world. “If we can change our perception of situations, we can change the reality of the situation.” He wanted us to think about: What can we start doing, stop doing and continue to do?

In my off-time, I visited Bourbon Street, took a walk along the Mississippi River and had dinner at two really good bars/restaurants – Coops and Galliano. The trip was a success in that I gained some good information about how to streamline the RFP process and met many terrific people while in New Orleans.

Jill Carlson is an associate manager, communications and RFP specialist at TDS. She is also a freelance writer for local Madison publications. She enjoys spending time with her Scottish terrier, Fritz, gardening, visiting National Parks and singing in the Madison Opera chorus.

Bid and Proposal Con, conferences, phil in the circle, RFP, Ted Talk, Tips and Advice, What I Learned