Is it time for your wake up call? 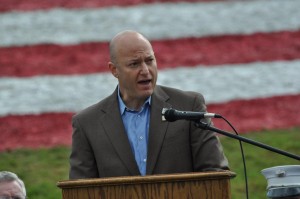 Two weeks ago, the TDS commercial sales team had the pleasure of listening to a talk by motivational speaker Mike Jaffe. One fateful Monday afternoon, Jaffe decided to make a small change in his work life. He vowed to take a later train on his two-hour commute from Connecticut to New York City and use the extra time to have breakfast with his wife and one-year old daughter. The day was September 10, 2001. That next morning, Jaffe was still on the train, instead of at his desk, when the first plane hit his office on the 96th floor of the World Trade Center.

It was the ultimate wake-up call and an example of how small changes can have huge impacts. As Jaffe says:

In the simple act of choosing a small step toward my larger goal, I had turned myself around to face downstream and take responsibility for the direction in my life. Sometimes we give in to the illusion that we have no control over our lives. Yet small decisions can make big differences in your life.

A wake-up call isn’t necessarily about one big moment, it’s about living consciously. Jaffe’s speech reminded me of one of my favorite stories about former Marquette University basketball coach Al McGuire:

One of the most meaningful of McGuire’s lessons was his “take a right turn” philosophy. It was born out of his daily trips from his home in the Brookfield suburbs into Milwaukee and Marquette. Every day, he’d reach an intersection in which a left turn took him into the city but a right turn sent him into the pastoral Wisconsin countryside. Once a month he allowed himself that right-hand turn.

It was spontaneous and unannounced. He wouldn’t call in to Marquette to say he would be absent. That would destroy the spirit. Besides, his assistants knew where he was. In some ways, it’s the antithesis of the brick wall. Instead of the determined battle for wins, taking a right meant that he was pausing to allow life to come to him. He wasn’t chasing life. It was meeting the guy with two teeth missing.

What I love about Jaffe’s and McGuire’s philosophies is the idea that every day is a choice. It’s so easy to sleepwalk through your days (Quick quiz! Do you actually remember anything about your drive to work this morning?), but all it takes is one choice, one decision, or one right turn to make a change.

By now, most of us have broken our New Year’s resolutions, but it’s never too late to try something new for you or your business. Challenge yourself right now. Take a class. Learn a new skill. Test a new way of doing something. Invite a fresh face into a meeting. Be inspired! You never know what will flow from the small decisions you make today.

Time is ticking: Three ways to make the most out of today
Control what you can