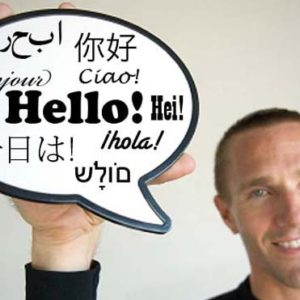 Learn the language of brain power!

Studies are showing that language study pays off in more ways than being able to ask where the nearest bathroom is located while vacationing in a foreign country. Learning a new language, particularly if you do it in a short period of time, boosts mental focus and retention reserves.

And here’s the biggest surprise of all – the older you are, the more benefits you might reap from learning to dilo en español!

Researchers at the University of Edinburgh recently assessed different aspects of mental alertness in a subject group ranging in age from 19 to 78. After a one-week Scottish Gaelic course, the subjects were tested against two groups – one which had undertaken a week’s study of another, equally challenging subject (but not language) and another which did not engage in any formal study. Results showed that the group which studied language did significantly better on mental tests than the group which did not study at all.

The researchers concluded that it’s never too late for learn a language, but more important, even a one-week language course can positively impact mental acuity.

With only five hours of practice weekly over time, the researchers found that the subjects were able to maintain their “extra” brain spike in performance over time. While about a third of the younger participants said that the week’s course improved their performance over time (without additional language study), a whopping 60% of the older subjects reported that their overall ability to focus and to retain information improved indefinitely from the short course.

This is not an isolated study or finding.

Scientists have measured brains before and after language training and actually suggest that learning a language makes the brain grow, especially if the learning takes place in a short period of time. For example, the Swedish Armed Forces Interpreter Academy trains recruits to become fluent in a new language – many of them considered the most difficult to learn and speak – within 13 months. There, researchers gave subjects and a control group of non-language learners an MRI scan before and after the period of intensive study. While the control group’s brains remained unchanged, the brains of the language recruits showed that their brains physically increased in the areas of the hippocampus and three areas in the cerebral cortex.

Another supporting finding: previous research has indicated that bilingual or multilingual people, as a group, has a later onset for Alzheimer’s group and overall lower rates of Alzheimer’s affliction. Judith F. Kroll, a Penn State cognitive scientist has explained it this way: The consequences of bilingualism … reflect a reorganization of brain networks that hold implications for the ways in which bilinguals negotiate cognitive competition more generally” – meaning that the brains of second-language speaking peoples creates more complex wiring which adds to overall brain processing capacity. Further, learning a language seems to be the quickest and most direct route to improve overall brain performance.

Subscription apps like Babble are available which feature low-cost, self-directed language learning with mobile device options. It’s never too late to build up mental reserves, and never too soon to learn to speak French, if only to order off the menu when taking an important client out to dinner, or to learn Chinese, if that would increase your opportunities for career advancement.

Whatever your reasoning, learning a new language is good for your brain.