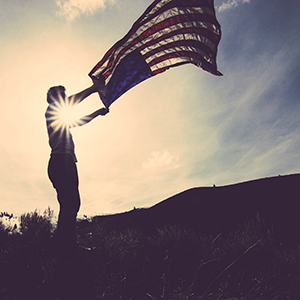 Ask five older Americans what their ancestral heritage is and you’re likely to hear a foreign country mentioned. Then ask a young adult. When one of five millennials’ parentage includes a first-generation immigrant, their answer is just as likely to include a foreign reference.

My family, for example, still identifies itself as Scotch-Irish – even these many decades after the first immigrant arrived. My red hair gives a strong hint of my Irish roots. Likewise, my husband’s Slavic looks testify to his family’s Russian heritage. We can see the influence of Asian ancestry on young American faces, while others display clear African, German, Swedish, or Indian roots. But what does an American citizen look like? There is no one “American look” for we are the backdrop where so many human flavors blend into new and beautiful colors and facial features. Unless you are the beneficiary of a 100% Native American bloodline, you are a product of assimilation.

It takes the average immigrant family roughly 200 years to fully assimilate, experts say, because it takes several generations before the family considers itself to be native to the new country rather than a remnant of the old. In order to cope with the nostalgia of leaving a native country, Bhugra and Becker suggest that most immigrants go through a process of “acculturation” — absorbing the culture of the host country, while retaining the traditions of their original heritage. Some holiday celebrations – St. Patrick’s Day and Cinco de Mayo, for example, may even be adopted by the host country.

Why did your ancestors come to America? What promise did this shiny new nation offer? Was it a choice or a refugee situation? Regardless of birthplace or ancestry, if you’re a citizen of the United States, July fourth is one of the top three most treasured holidays of the year. Parades, picnics, banners and fireworks are only some of the many ways we celebrate how a country of immigrants united to form contiguous states under one new government based on the inherent rights of religious and economic freedoms. We formed a capitalistic economy not based on the caste you were born into, but one imbued with the potential to rise above your birth station based on your personal industriousness. These were the ideals of the founding nation, and they remain the goals we, as a united identifiable nation, still present to the world today whenever and wherever our flag is flown.

These are the stories we could share to help create a more inclusive and celebratory July 4th holiday. We could learn why and how our co-worker’s families came to this country – and how they celebrate living in one of the best places on earth. We could ask, too, what traditions they brought with them and still celebrate from “the old country”.

Why consider this on Memorial Day? Because the ultimate sacrifice was made by those many immigrant sons, daughters and grandchildren on behalf of this great shining example of a free country. Let’s look behind at those sacrifices, yes, but let’s also look ahead to July 4th and plan to celebrate the ideals for which some members of our families gave their lives.

Let’s pledge this year to celebrate the real America.

In case you missed it: Disaster Preparation
Severe weather alerts: what they could mean to your business