When Jeff Mand, a retired Army Captain returned from serving in Iraq in 2005, he was greeted by more than just family and friends. Mand also had a job waiting for him at TDS. He says, “When I came back home, I stepped right into my team. Less than a year after returning, I was promoted to a manager with TDS. I was afforded the opportunity to lead folks back here not long after leading folks in Iraq.” TDS has been recognized by the military for its support of employees serving in active and reserve units

Unfortunately, Mand may be the exception not the rule. According to the Bureau of Labor Statistics almost 9.2% of Gulf War – era II veterans (any veteran who actively served in the U.S. Armed Forces post September 11, 2001) age 18 and over are unemployed. At the time of this writing that’s almost two full percentage points higher than the national average. For male Gulf War – era II veterans between 18 and 24 that number jumps to 20%. 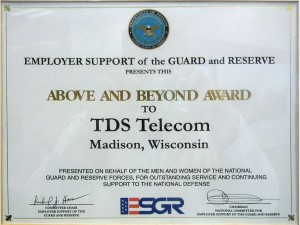 The reasons why young veterans are struggling to find jobs varies. One of the more popular theories suggests employers may not understand what veterans are saying. Last year the Washington Post reported 80% of employers interviewed by the Center for a New American Security (CNAS) say they don’t understand how skills soldiers acquire in the military translate to the business world.

Those same employers say in many situations soldiers struggle to explain how their skills will transfer. The CNAS report also says, “The importance of certain awards or qualifications or a quick progression through pay grades relative to time in service may be lost on many civilian employers.”

In a recent story that appeared in the Silicon Valley Mercury News veteran’s advocates say part of the problem is there isn’t enough help for former military members looking for civilian work. They also say the stigma associated with combat-related mental health issues, like post-traumatic stress disorder (PTSD), may play a role as well.

Advocates say the good far outweighs the bad when it comes to hiring military veterans. Military.com offers employers 10 reasons to hire vets. Some of them include accelerated learning curves, efficient performance under pressure and respect for procedures.

Mand says he can’t take credit for his success. He gives a lot of the credit to his family and to the Human Resources team at TDS. Mand says, “I am very aware that the success I have had is directly attributed to the good teams I have been a part of— good leadership above me and good peers around me. I am not an individual blazing trails.”

Mand believes if given the opportunity any one of the 207,000 estimated unemployed veterans would be able to do the same.