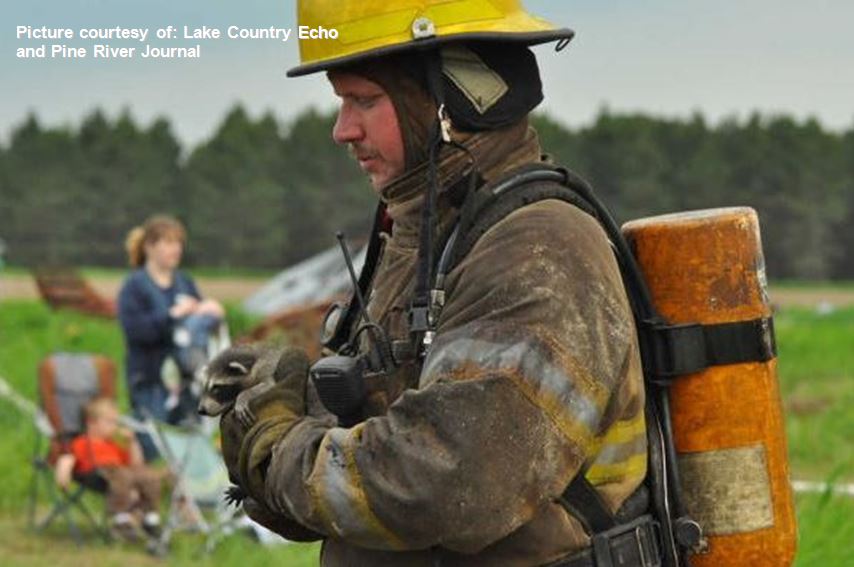 Ryan Trumble is a Field Service Technician (FST) in Pequot Lake, Minn. He’s also a fire fighter with the Pine River Fire Department and he’s now probably a hero to one baby raccoon.

On Friday, June 14, the Pine River Fire Department, Backus Fire Department, and members of two other fire departments participated in a training burn. According to the Lake Country Echo and Pine River Journal a local family donated a two floor home for the training exercise.

Before the exercise started fire fighters went into the vacant home and made sure nothing was living inside. Trumble says, “We do that before every exercise. But no matter how thorough you think you’ve been there’s always one or two spots where an animal can hide.”

That’s just what happened. Trumble says the first exercise started on the second floor. As soon as the fire started a male raccoon escaped to the roof. A few minutes later a female raccoon ran out the front door. Trumble believes there was a crawl space or area they weren’t able access in the attic where the raccoons were hiding.

It was during one of the exercises that Billy Rickard, a fire fighter with the Pequot Lakes Fire Department and spouse of TDS employee Kristine Rickard, spotted a baby raccoon near the bottom of a flight of stairs. He collected the raccoon, got it outside, and handed it to Trumble. A few moments later a reporter for the local paper captured the above picture of Trumble and the raccoon as he walked it to safety.

Trumble says he’s participated in close to 100 training exercises in his career. But this one was unique for obvious reasons. He says the raccoon was scared as he carried it to safety. The Rickard family watched for the raccoon overnight. They named it “Smokey.” The next day it was taken to a veterinarian for care.