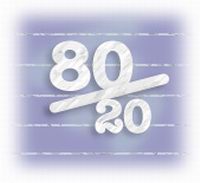 The Pareto Principle – the idea that 80% of the effects are attributable to 20% of the known causes – is credited to the late Italian economist Vilfredo Pareto, who noticed that 80% of the peas in his garden came from 20% of the pea pods, 80% of the land was owned by 20% of the population, and so on. But what does a 1906 probability observation mean for 2012 American businesses?

Here’s a case study of how an 80/20 analysis works, using Great Big Pictures, which makes the big posters displayed in retail stores and malls all across America. Owner Alice Torti implemented 80/20 changes with resounding results. “We first ranked customers in order of revenue, and then looked at the cumulative to determine at which point we received 80% of revenue,” she explains. “Then we determined if anyone excluded from that list could become a large customer.”

During our discussion, Torti admitted to not realizing, prior to the analysis, that yes, more than 80% of sales expense went toward servicing the 20% least profitable clients! Armed with that data, she then purposely moved smaller customers over to eager competitors and directed sales staff to only seek out higher-end customers, concentrating customer service efforts on retention of top clients.

The result? “The 80/20 analysis helped us do very well. We had happier customers, happier employees, better profits, and overall, more control over our company.” Torti reports that profits soared “58-times higher” after implementing 80/20 efficiencies. [Likewise, Illinois Tool Works credits 80/20 analysis, in part, for it’s climb to become a Fortune 400 company with 60,000 global employees.]

Anita Matcha, strategy advisor with Smith & Gesteland, facilitated the 80/20 four-step conversion at Great Big Pictures. First, there was a detailed data analysis to determine where the organization made money. Second, Matcha helped separate unlike business units, holding them accountable to P&L analysis — leading to the first transformation in the way business was conducted. Third, the appropriate level of resources was assigned to each business segment. Sometimes, Matcha notes, organizations “starve the most important portion of the business while assigning too many resources to other parts of the business that are not very profitable or are not a growth segment. Those situations are always embedded in the data.”

At Great Big Pictures, the third step led Torti to the decision to cut staff from 200 to about 110 – “[After conversion], we didn’t need as many people to manage the larger clients,” Torti explained, though wherever possible she made cuts through attrition and layoff with severance packages.

Torti said the biggest shock was “the realization that we had 75% or more of our clients that weren’t really buying enough to make the cost structure worthwhile.” And her biggest reward was the profit picture that emerged after turning those percentages around.

Want another “best practices” tip? Check back next week, when our topic will be how to craft no-nonsense performance reviews.