The down side of being a workaholic 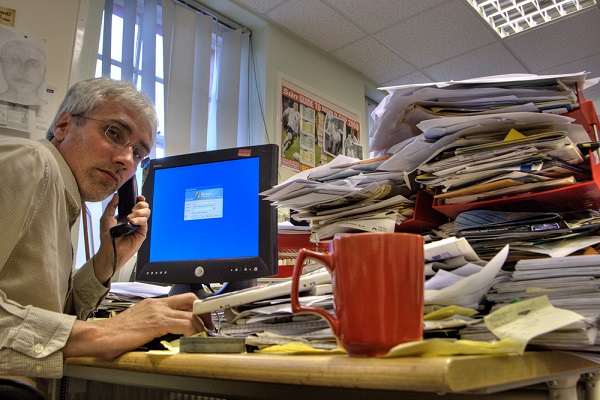 Being a ‘workaholic’ came up in discussion recently and I found it very interesting to hear the different perspectives people held. Some thought workaholics were really super-employees. Others thought them to be mentally ill. I actually believe it’s more of a symptom than a title.

Defining the term workaholic is not easy (as there is not a clinical definition), but the two common themes seem to be:

Growing up in a Midwest, blue collar family, having a strong work ethic was rewarded and praised. I used to think being a workaholic was a trait of a hard worker. However, taken too far this value can cause a host of problems in an employee’s life. Pushing yourself for extended periods of time can cause wear on the senses, burnout, anxiety or depression.

The best perspective I have ever heard about workaholics comes from Dan Millman in his book, No Ordinary Moments. He portrays tension as a situation of having excess energy and behaviors like over eating, over training, and over working act as ‘gateways of release.’ For example, under stress we may want to burn off excess energy through a workout and that would be healthy. But working every body part every day for three months is over training, and you actually lose performance by breaking the body down faster than it can build up. Some people may find themselves unconsciously eating throughout the day, even though they are not hungry. This over eating can provide a soothing effect on the body but it can become an addictive release. Millman argues that these are ‘gateways of release’ and indicators rather than root causes.

The hard thing about over working is that hard work is considered a virtue and a positive trait. Sometimes projects require additional effort for completion and long hours are sometimes necessary. Small business owners often are required to wear many hats and perform many tasks that regular employees wouldn’t need to. So how much is too much?

According to a 2014 Gallup survey the average work week is 47 hours. If you occasionally need to do an extra hour to wrap up a project then it can push the average higher. If event planning is part of what you do then the ‘week of’ can be incredibly demanding. And don’t even get me started on live theatre and tech week…

Shutting down after a long stretch of extended effort is required. If taking a vacation includes bringing the laptop, working on reports, and answering emails while on the beach then there is likely some internal work to be done. Excess tension is likely a motivator, making detaching a challenge.

In college I spent one semester weight training in the gym, every day. I’d work every body part, multiple exercises and I did that for 3 months. I learned what over training was and how physical performance degrades when the body doesn’t get adequate time to recover. When I was a store manager I took on a project that demanded an extra 20-30 hours per week. While it managed to add 6 figures in sales in a 10 day period I wound up learning what over work was. I learned what happened when I didn’t detach from my phone or take a vacation after that well-earned rest. Burnout and reduced ability are tough experiences.

The most important lessons learned from these experiences included:

Not minding these limits will lead to burnout, anxiety, depression or some other unpleasant consequence. It’s time we stop rewarding unhealthy attitudes because it’s bad for the health of our workforce and bad for business to operate at reduced capacity. Nobody wins in the long run. Change your mind, change your reality.

3 reasons you should get on board with Voice over Internet Protocol (VoIP) now!
The workplace of the future is going to the dogs

5 Responses to The down side of being a workaholic