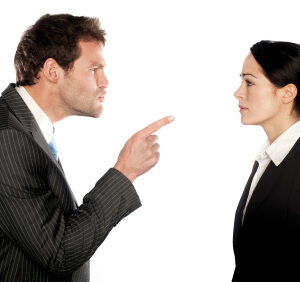 Work with a scoundrel?

I once had a colleague who was morally bankrupt.

This sales VP over-promised results his staff could not deliver or support. When a key sale fell apart, he often held a scapegoat up to ridicule for not being inventive enough to add the promised non-existent feature.

He used company resources for private gain and constantly made offensive remarks to those in his department. He also socialized with the company president and enjoyed her full trust and support, in large part because the persona he flashed for the president was far different from the day-to-day face his direct-reports had come to know and despise.

However, to his credit, his employees were among the highest paid. They enjoyed high-profile jobs, and he looked the other way when they needed extra time off. They didn’t want to leave the company. Because of this, his leadership “style” prevailed and most of his employees tried their best to help cover up his ineptness.

Then a young maverick manager, confident in her own value to the company, decided to tackle the situation head-on after losing a top client, who had been promised work that was far beyond her company’s ability to design or deliver. Fearing her boss would brand her incompetent to the company president, rather than own his responsibility for lying about what the company could deliver, she decided to plead her own case.

During a private meeting in the president’s office, she described the promises made at time of sale and then added her complete list of complaints about her boss’ lack of ethics. She hoped to convince the president to reconsider who was leading their team and the direction that leader was taking the company.

Within half an hour she was unemployed.

When reviewing her dismissal with me during our weekly one-on-one meeting, the president said that whether she was right or wrong, she had to go because of her lack of respect for the established chain of command. The dismissed manager admitted she hadn’t addressed her concerns directly with her supervisor, and the chain of command, the president reminded, was not to be breached.

On the other hand, the woman was asking the president to realize her own role in putting trust in a scoundrel and not noticing what was happening to her company as a result of that lapse of judgment.

In essence, the manager was pointing out that there were two ineffective leaders in charge, and the president was one of them. In addition, she was speaking up at a point when she had just lost a client, not after just making a huge sale. That allowed the president the opportunity to dismiss her claims as a CYA (ahem, “cover your you-know-what”) move.

Oftentimes there’s no obvious gain in being self-righteously “right”, but if a lack of integrity is impacting your day to day outlook or performance or your company’s reputation or future, you’ll want to respond to the best of your own strength of character.

The key to that response, however, is approach and timing. Particularly in growing companies, some people will try to make their way on promises instead of performance, or by dictating the rules of a less-than-workable game and adopting chameleon qualities.

Even when the culprit is a CEO, Harvard Law reports that a board is more likely not to fire an executive wrongdoer. So the question you must answer is whether the environment is correctible, endurable or toxic for you. Can you sidestep the muck or contribute to a better way of doing things? If not, consider timing – speaking out from a position of strength or consider an exit strategy that doesn’t leave you without a paycheck.

Back to my true story… the president fired the vice-president within weeks of the manager’s complaints based on an impropriety she noticed.

Yes, it most likely was because the manager opened her eyes to be more vigilant, and yes, in the end, she was proven right. But the manager wasn’t re-hired and that’s usually the way these things go, too.