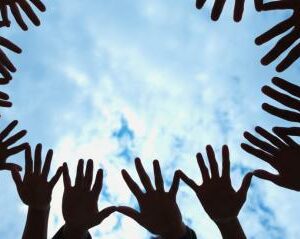 Networking for the Greater Good … and Yours

Those of us who read business blogs, or attend conferences to learn something new, do it (in part) because we want to make a difference 1) in our world and 2) in the greater “outside” world. Likewise, many of us imagine that when we “make it”, we’ll “give back” … without realizing sometimes that we hold the power now to contribute to the difference in the world we want to see. Opportunities for improvement or change usually don’t announce themselves openly, and yet they pop up once you think of yourself as a change agent.

Example: the other day I happened to be in a building being considered by a fledgling scout leader for meetings with her newly chartered Brownie Scout group. We were serendipitously introduced and I asked her about the cost of joining Scouts for her little girls – if they could afford the uniforms, because I knew she was serving a poor school district. She said no, many families didn’t have the $62 to outfit their daughters properly, so they were considering making t-shirts to show group unity.

Long story short: I gave her the names of three presidents of non-profits who do set aside money for community causes. I suggested she provide them with detailed accounts of the costs for one uniform and then ask if they might, at a minimum, sponsor one or more of the seven scouts. Within a week, she had commitments of $500 from the Rotary, $200 from the VFW, and her leader’s outfit was provided by the Women’s Club. Thinking of future scouts, since a uniform is a great recruitment tool, I influenced another community development non-profit (of which I am the president) to set up a line item for “children’s causes”. We funded it with an initial $1,200 to ensure that any other scouts joining during the first year of formation would have a uniform provided as well. The balance in that fund was set aside for other opportunities that encourage children’s value development for future community stewards.

The point is this – you don’t personally have to have all the ways or means to achieve a social good or a business goal. But likely you know someone or some resource that might contribute if asked or if made aware of the need. Your assuming the role of influencer or change agent might make all the difference.

We have formalized this way of thinking in “professional peer groups” such as BNI and others. I’ve helped to create “diva groups” – women who band together, usually in groups of four, to promote one another’s career goals. They associate themselves with people they admire, and then the collective meets monthly to discuss progress and to provide leads. It is amazing, when they focus on helping one another, how quickly opportunities to promote the group members “magically” present themselves, and how easily reciprocity comes into play with regard to their own success.

You can’t always be or contribute the total change you want to see, but you can often assist it. Sometimes it’s simply a matter of viewing the world from a different perspective.

The Gig Economy: What it means to you
2017: The Year of Women on the Board?

One Response to Networking for the Greater Good … and Yours