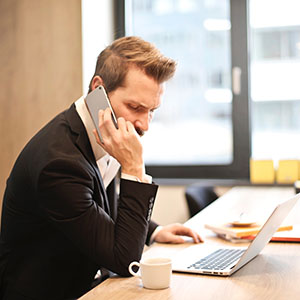 Almost half of all calls will be scams by 2019

Yes, you read that right. Nearly 50% of U.S. mobile calls will be made by scammers in 2019. I don’t know about you, but I’ve been receiving more and more in recent months. While that’s purely anecdotal, it looks like there’s some solid quantitative evidence to support it.

First Orion, a mobile data and solutions company, released its “2018 Scam Call Trends and Projections Report,” and the biggest takeaway is that these types of calls are increasing at an exponential rate. According to past reports, scam calls only made up 3.7% of calls in 2017 and have increased to 29.2% in 2018. They are now expected to reach 44.6% by the beginning of 2019.

There’s a surefire way the scammers are getting us to pick up, too. Known as “Neighborhood Spoofing,” the caller can alter their phone number to display your area code, which makes it appear to be a local call. But it’s not your dentist, your old friend who sells life insurance now, or anyone else you might know, but their number isn’t programmed in your phone.

Because the scammer is using a local number, often people will call back—only this time the rightful owner of the number will pick up. Even though you may have missed being roped into a scam, your time is still being wasted. According to the report from First Orion, third-party call blocking apps aren’t effective in blocking this type of scam either.

It’s important to note, Businesses are by no means exempt. In one FTC case (Federal Trade Commission), scammers sent out robocalls that claimed to be Google, saying they needed to pay to have their business appear in search results. Considering businesses actually can pay Google for certain advertisement and online reputation management services, this scam is particularly dangerous.

To protect yourself and your business you should do the following:

Passwords & Passcodes Webinar
How to prepare for Small Business Saturday