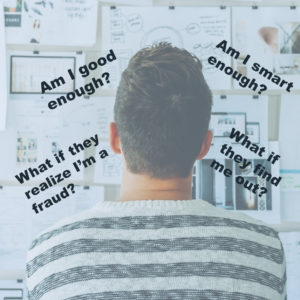 Three ways to get past feeling like an imposter

Literary figures, actors, and business professionals have all provided anecdotes about suffering from “imposter syndrome” — a concept describing high-achieving individuals who nonetheless can’t accept their accomplishments at face value. It sounds benign except that sufferers of imposter phenomenon report living with a persistent fear of being exposed as a “fraud”, even when recognized or promoted for their good works. The neurosis isn’t yet recognized as a disease or disability, but it is prevalent enough that it has triggered its own line of psychological research, spawned popular science articles, and inspired Ted Talks. Perhaps, then, it merits discussion here.

Who is most likely to doubt their achievements? Initial research suggested females were, but that has since been explained away by women’s tendency to be more forthcoming about their feelings and stresses. Today’s thinking is that imposter anxiety is a gender-neutral worry. Is it a minority complex over being different inside of an industry or departmental peer group? Perhaps culture plays a role, but why it would is being reconsidered after a 2013 study conducted at the University of Texas – Austin. It revealed that Asian-Americans were more likely than African-Americans or Latino-Americans to experience impostor feelings.

According to Dr. Pauline Clance, who first described the phenomenon in 1985, perfectionism is an underlying player for most of the target population. Further research indicates that many people with the anxiety grew up in families that stressed achievement but did not consistently reward for it, instead raising the standard even higher after the stated goal was met. Other research indicates that imposter syndrome might rear its ugly head when someone is between achievement levels, such as when one is in graduate school (between college and professional work), or when one becomes a mid-level manager with dreams of promotion to the C-suite. This pressure to rise may create a fear that outside judges will not find a person’s past experiences or achievements to be of a high enough quality for even the post they currently hold.

Regardless of the cause, the anxiety can be crippling, so let’s turn our attention to three suggestions sufferers and clinicians have offered as to what to do about it.