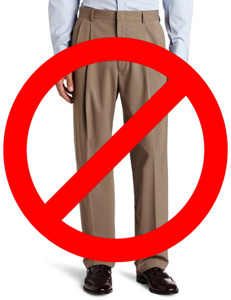 While we can all agree that leggings are not pants, the office fashion rules for men aren’t nearly as simple. There’s no single fashion rule for the fellas, but here’s our take on the top ten men’s fashion faux pas.

10. Uggs: Even their spokesperson, Tom Brady, doesn’t wear these to work. 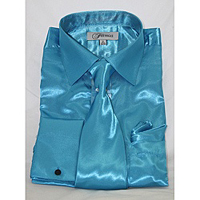 9. Clubwear: Unless you’re job shadowing Haddaway (What is love? Baby don’t hurt me!) for the day, save anything too shiny, too tight or too mesh for the weekend. Actually, on second thought, just toss anything too mesh. Please! 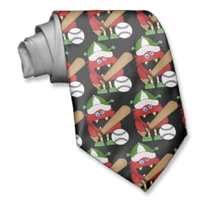 8. “Fun” ties: I understand that sometimes guys feel the urge to express their individuality via accessories. But you have to be careful with this. You never know when wearing the wrong tie will get you fired or brand you as immature or frivolous or a fan of the “wrong” Disney character.

7. Cardigans: Are you over 65 or Justin Bieber? No? Then stay away from the cardigans. Macklemore can get away with wearing your Grandpa’s clothes (and looking incredible), but you’ll just look like, uh, your Grandpa. Because of their trusting (and trustworthy) nature, cardigan wearers are 2.6 times more likely to click on malicious links (luckily TDS Internet Security protects against online security threats).

6. Socks with sandals: When our TDS Fashion Squad compiled this list we originally included just sandals (or mandals), but upon further review, we had to admit that if sandals are okay for the ladies in the office, they’re okay for the guys too. What’s never okay is wearing socks with your sandals. You’re not a German tourist. Say “auf wiedersehen” to the socks! 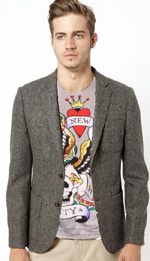 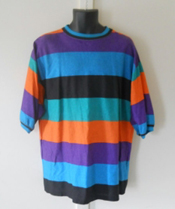 4. Oversized anything: Sure, two heads are better than one, but that doesn’t mean your shirts should be cut so large that those two heads can fit through the hole. And let’s not even talk about baggy pants. I’m ready to channel my inner Grandpa and tell those darn kids to hike their pants up (after they get off of my lawn, of course).

3. Shabby shoes: There’s a lot of talk about going green. That’s great. We do our part with voip solutions that are ideal for remote workers. Going green doesn’t mean wearing the shoes you wear to mow the lawn to the office. Don’t ruin your entire look with shabby, scuffed up shoes.

2. Manpris: Unless you’re afflicted by some horrible disorder that causes only your lower legs to heat up, I can’t think of any reason why you need to wear manpris to the office.

What do you think? What’s the worst guy’s workplace fashion faux pas? And, remember, even if you’re part of a virtual team, you can’t just wear “virtual pants”. Dressing up helps you stay productive when you work from home.

You’ve got to be kitten me!
Your next key hire: 3 questions to ask, 3 to answer