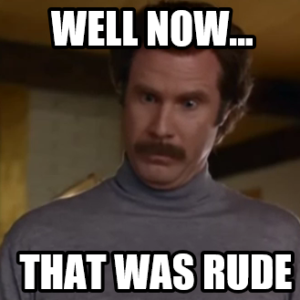 Do you display “low intensity deviant behaviors with an ambiguous intent to harm”? Chances are that you do or will, if someone is rude to you today.

Incivility at work has doubled in the last couple decades, and most of us have casually lobbed a snarky comment or two at work. In turn, a Harvard Business Review poll estimates that 98 percent of us have been on the receiving end of uncivil behaviors while on the job.

Psychologists today are likening workplace rudeness to a nasty germ.

They have concluded that sarcastic facial expressions, demeaning words and unprofessional eyerolls actually do create a domino effect in the workplace, and an entire office can quickly be pulled into a downward spiraling negative vibe. But why, when most of us believe that people are basically good and we all prefer to work in a great work environment with people we genuinely like?

A recent study headed by T. Foulk at the University of Florida researched this rudeness contamination effect. In the abstract summary it was noted:

“In these three studies we show that, just like the common cold, common negative behaviors can spread easily and have significant consequences for people in organizations.”

Meaning: monkey see, monkey do. Somebody slams you and you’re biologically wired to slam the next person in line.

A related four-university research study by Rosen, Koopman, Gabriel, and Johnson was designed to demonstrate and measure the impact on employees who were confronted with such rude behavior. Their research revealed that those subjected to incivility in the office are very likely to display rude behavior themselves later in the day.

Why? Because, the scientists postulated, ego control – that part of your brain that reins in impulsive or rude behavior – gets worn down by trying to keep your cool when somebody throws shade your way.

They measured ego control before and after a rude encounter, and found that self-control suffered injury as well as insult. Your “self-control” brain center, when fatigued, loosens its influence on your behavior and you spout off when you otherwise might have held your own tongue. This response is dubbed “instigated incivility,” meaning it isn’t all your fault. (Mostly it is, but it’s somewhat of a delayed, knee-jerk reaction).

Experts suggest that the best way to avoid the contamination is to reframe what just happened. Deal with the situation rather than carry it with you to the next encounter you have.

First, ask yourself honestly if you are too sensitive to normal workplace banter. Or is the comment or behavior truly over the line and disrespectful? If it’s the latter, address and reject the rude behavior as soon as it occurs. Speak in a confident but concerned tone; privately ask the office bully about the real reason they are seemingly put off or offended by you. Another option, for people who fear even reasonable and low-key confrontation, is to flatter the person in response. Take control of the situation by modelling positive behavior; it’s an effective way not to carry the rude germ away with you after the encounter.

A final option, other than taking the situation to human resources, is to consciously let the situation go, even if the remark or behavior was rude and unfair. You can only control your own emotions and responses. Be mindful not to replay the act later in the day.

As Mahatma Gandhi suggested, “Be the change that you wish to see in the world,” and leave the workplace better than you found it today.