Swimming with the sharks 2 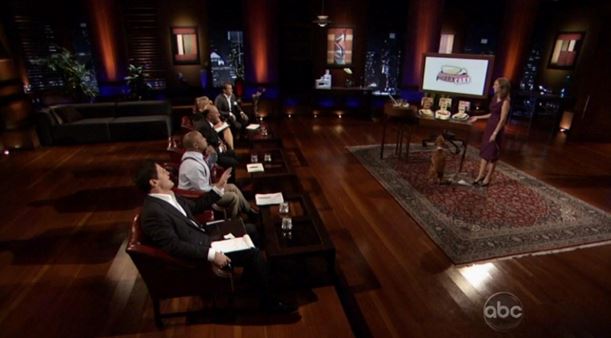 Later in the day I was taken over to the Shark Tank set to film the “jitters,” the 30 seconds they show of the entrepreneur looking nervous and scared in the room outside of the Shark Tank hallway.

While we were trying to get Minnie to sit still and look at me, she looked right at the camera and “relieved herself”! The crew and I couldn’t help but laugh. Minnie offered some comic relief when I needed it.

I had a little down time once I was done. Backstage I whipped up some frosting, topped a fresh Puppy Cake for Minnie, and inspected the table with all of my products on it.

The sound guy came over and hid a microphone in my dress. With the back half of my dress unzipped I said to him, “You have the best job in Hollywood.”

I had one last makeup and hair check. I started wondering what I looked like. I hadn’t seen a mirror in over 30 minutes and two people had been putting lipstick, powder, mascara and hairspray on me. I didn’t have enough time to check because one of the producers came over and said, “We’re ready.”

I remember standing in front of those doors feeling incredibly overwhelmed. “What if I forget my pitch?!” I had no time to run through it again. A leash was handed to me, I got one more touch up of hair and makeup and then a man started counting down.

The doors opened and I started walking. I feel nervous just writing about it!

The hallway is long; at least, it felt that way. Everything I was nervous about seemed to disappear with every step I took. I reached the “spot” and stopped. Minnie, the perfect actress, stopped too and looked out at the sharks.

Unfortunately, I did not get to meet them ahead of time. I didn’t even get to shake any of their hands. What you see on TV is pretty much what you get. It’s daunting because those five successful entrepreneurs come with a lot of clout.

I took a deep breath and began my pitch. After I said I was from Pittsburgh, I made eye contact with Mark Cuban, who gave me the thumbs up. My pitch was flawless and Minnie behaved perfectly. She jumped up on my product display table. I would have loved it if she knocked the whole thing over to get some more Puppy Cake.

Was I nervous? Absolutely! But, while I was there, something changed. I was a business woman. I knew my stuff. I had a statistic to back up why I started this business, why I have made money with a tiny marketing budget, and no distributors. 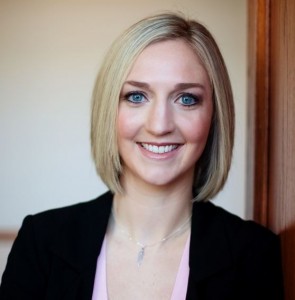 Kelly Costello swam with five sharks and lived to talk about it.

I fought back and stood my ground when Kevin O’Leary made ridiculous comments about dogs and dog owners. Robert Herjavec was out really quickly, so quickly I didn’t even have time to acknowledge he was out. Lori Greiner was nice and talked about how there are lots of dog owners who want to give their pets treats like this. Kevin must have been channeling Simon Cowell because he kept coming up with cutting remarks. I actually laughed at one of his comments because I thought he was surely joking. He wasn’t. Daymond John just couldn’t see himself ever buying this product and couldn’t get excited about it. He was out. Mark was very nice and gave me some good advice.

I knew my weaknesses and I was honest about them. I graciously took the advice the sharks gave, thanked them, and walked out.

One thing they didn’t show on camera was as soon as we got to the doors, Minnie, spun around and barked at the sharks. Thanks, Minnie!

I exhaled deeply when I came out the hallway. I knew I did my best in there and that was my ultimate goal.

Watching myself on TV was so weird. I actually hid behind my sister when the episode finally aired. I still haven’t seen the whole thing.

What has happened since Shark Tank? A lot, to say the least. My sales quadrupled from 2011 to 2012 and doubled from 2012 to 2013. I have added a new flavor: red velvet, a new product: Puptato Chips, and I’m working on an easy to whip up frosting.

My biggest problem was I needed money to be able to attend trade shows to get more stores to carry Puppy Cake. Since the show, we have attended the HH Backer Christmas Show where Puppy Cake was chosen as the bronze winner of the Retailer Select Award for new products! We also attended the largest pet trade show, the Global Pet Expo, twice.

What’s next? Oh, the journey has just begun!