What to wear when you telecommute 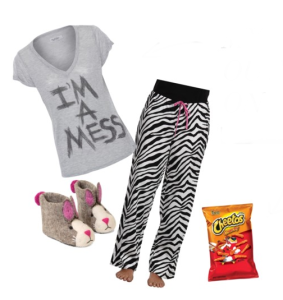 While all-white ensembles, 90s-inspired chokers with combat boots, and huge furs were among the top fall trends at the recent New York City Fashion Week, how much does that really matter to the 34 million Americans who work from home?

It’s easy to stereotype telecommuters as pajama-clad recluses more concerned with cat hair than the catwalk, but the truth is somewhere in between. Today’s telecommuting dress code runs the gamut from khakis to yoga pants, and yes, even the occasional pajamas.

But what should telecommuters wear? Isn’t one of the big perks of working from home that you don’t have to worry about your wardrobe? Not so fast, my friend.

As one image consultant points out:

If you work from home, your credibility is suspect. While more than 90% of the population worked from home prior to the industrial revolution, people who work from home today are viewed as less serious than their commuting counterparts. Even with the number of home-based businesses expanding at an incredible rate, the question of legitimacy still remains.

So how do you combat this bias? By always being professional. One of the easiest ways to convey this is by simply dressing the part. 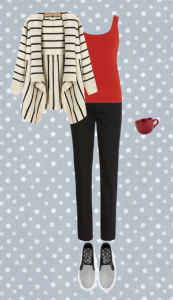 Of all the home-based businesses I’ve dealt with in my life, most of the successful ones understand this basic concept. The ones who struggle or fail, don’t. It’s such a simple element — but one that can have a huge impact on your bottom line. And I mean huge.

As more and more of us telecommute at least part of the time, this bias will probably go away, but what won’t change is the fact that study after study shows that what you wear makes a difference in your productivity and mental state.

For some workers, wearing the same type of clothes in and out of the office is troublesome. It becomes hard to distinguish between their “work” and “off work” selves.

I call this the “George Costanza Factor”. As George famously said: “Relationship George will kill Independent George. A George divided against itself cannot stand.” Likewise, work you will kill weekend you. You have to create some kind of distinction between the two.

So how do successful telecommuters do this? I surveyed several friends and colleagues who work from home to get their opinions. They all admitted that their work from home style is more casual than what they’d wear to an office, but every single person also said that they do get dressed every day. One friend said, “I rarely wear anything ‘office’ style. Normally it’s jeans and a t-shirt with a hoodie if I’m cold. Working from home is awesome. I do change out of my pajamas in order to mentally feel that I am working.”

Another friend put on her workout clothes first thing in the morning. Even if she didn’t always hit the treadmill before she opened her laptop, she did always find a way out of her pajamas and into her work mindset.

That’s the key takeaway. You don’t have to give up the comforts of working from home in order to be a successful telecommuter, but you do have to build a clear divide between your work life and your home life, even if we’re just talking about pants.

Telecommuting, marketing and surviving the chaos
Pushing past analytical limitations