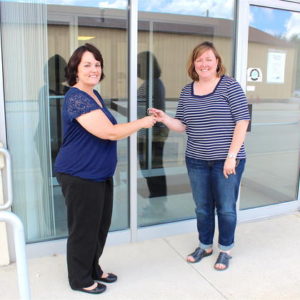 TDS in Roachdale, Indiana made headlines last week after the company donated its former regional headquarters to the community.

That’s right. An entire building was donated to the small west-central Indiana town.

The building — with large rooms and ample square space for offices — is set to become the town’s new community center. It became available after TDS relocated to a smaller building on the other side of town, and made the decision to donate its former facility.

Dave Seibel, TDS’ manager of Real Estate and Facilities, said TDS no longer had need for the larger building after it moved to its other facility in town.

“The Town of Roachdale has been an important market to TDS for decades and understood they were looking for a community center.  We decided to donate the building to show our appreciation for that relationship,” he said.

An article in the local Greencastle Banner Graphic explains more:

Roachdale Clerk-Treasurer Debbie Sillery, as well as TDS Senior Accountant and Roachdale native Jacquelyn Simpson, were present Monday for the ceremonial “passing of the keys.”

Each said she is excited to see what comes next for the center.

“We really haven’t had anywhere in our town for community events until now,” Sillery said. “It’s very generous of TDS to give us the building — it even has quite a bit of stuff coming with it like shelving and furniture.”

“Up until now you’ve had to go to the school or possibly the meeting hall,” Simpson added. “Now it will be really easy to host events.”

Work with a scoundrel?
Phishing isn’t worth the catch