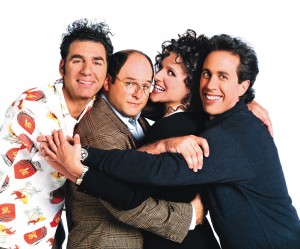 I went to college in the new B. C. (before cell phones), so I’ve often wondered how different those years would have been with modern communications tools. I mean, back in the day, on Thursday nights everyone just knew that me and my crew waited until after Seinfeld before we rolled into Schooners for quarter taps. Now, we’d be able to announce our intentions on Facebook, check into the bar when we arrived, and create a special hashtag for our typical Thursday shenanigans (#PartyLikeARockStar).

Like my reminiscences, the awesome Twitter account, Modern Seinfeld, attempts to place a 90s classic into the modern age. Basically, Modern Seinfeld posits likely Seinfeld scenarios as if the show was still airing.

George changes his Bday on Facebook to see if people actually know it. No one does. “They’re fakes,Jerry! I want the real deal or nothing!”

Elaine gets addicted to Pinterest DIY crafts. J “You’re buying mason jars to make a lamp? Call me crazy, but you could just buy a lamp.”

It’s genius and just makes me wish the gang would get back together. Of course it also makes me think about how the Seinfeld characters would use (or abuse) the technology enabled by our VoIP phone systems. It’s not that hard to imagine the following scenarios:

Elaine
Elaine has to decide when to upgrade her new boyfriend to a priority alert ring on her VoIP phone. Unfortunately, by the end of the episode they break up because she finds out he’s selectively rejecting her calls using his phone system.

George
George has been using the remote office feature of his VoIP phone system and hasn’t actually gone into work at Yankee Stadium in years. He’s shocked to find the old stadium demolished and a new one up in its place.

Jerry
Jerry’s parents start using a prepaid cell phone and since Jerry’s configured his VoIP phone to block all anonymous calls, his parents can’t get a hold of him. They fly up from Florida, convinced something terrible has happened to him, and burst in on him and his new girlfriend. The girlfriend breaks up with Jerry because she thinks he’s a horrible person for “ignoring” his parents.

Kramer
Kramer sends any calls he can’t answer on time to Jerry’s phone using his VoIP phone’s call forwarding no answer feature. The episode ends on Morty & Helen Seinfeld’s confused faces when their son finally picks up the phone, but answers with “Kramerica Industries, can I help you?”

As Kenny Bania would say, “That’s gold, Jerry! Gold!” But, in all seriousness, Seinfeld hasn’t changed, but our communications capabilities and expectations sure have. While Jerry and the gang would basically use that technology for evil or mischief, these features make your business more mobile, reliable and flexible. Just don’t hire George. Ever.